Woohoo, it’s March! The time we take to remember that women have existed for all of history.

Generally, Women’s History Month focuses on the women who were remarkably ahead of their time. The Elizabeth Cady Stantons and Harriet Tubmans of the world. But here at Retrofitting Vintage, we’re leaving the luminaries to actual historians, and focusing on an everyday woman of the mid-20th century.

And how shall we do so?

Why, with an ill-advised guinea pig journalism approach, of course. That is, in fact, how I roll. That’s right, it’s 1950s Housewife Month.

Let’s take a second to acknowledge that when we’re talking about a time “when women weren’t in the workforce” we’re mostly talking about married white women who weren’t poor. The stereotypical “1950s housewife” is a middle-class white woman.

Throughout history, many women had jobs. Jobs like: servant, store clerk, laundress, factory-worker, seamstress, farmer, school teacher, childcare worker, and more. The thing about these women is that they were largely poor or working-class and/or of color. When we talk about “women joining the workforce” in the 1970s and beyond, we really mean (largely) white women getting a crack at jobs that were previously held by (mostly) white men.

So my “ordinary” mid-century woman, while probably my own historical counterpart, was certainly not “everywoman.” Despite how large the 1950s housewife looms in the popular consciousness, she’s far from a standard of the “Way Women Were.”

The Goals of This Experiment

My goals are not terribly lofty. They are:

How It Will Work

Here’s the basic schedule I’ve developed from a variety of sources, including my favorite, the 1941 edition of America’s Housekeeping Book.

Well, that doesn’t seem too bad.

Until you dig into what those “daily morning and afternoon tasks” entail.

This is a fun project for Women’s History Month, not a historical reenactment. Here are the rules:

I’m not the first person on the Internet to attempt this kind of experiment. Jen But Never Jenn led the way 10 years ago, and Retro Housewife Goes Green has a lot of great stuff on 1950s style housekeeping. Check it all out.

If you’re a full-time homemaker, especially one with kids, you may not be that impressed with my experiment. Good for you, you sound very industrious.

What About Your Job?

I work from home, and I’ll slide my freelance writing jobs in where the mid-century housewife would do things like serve on a club committee, volunteer, or, you know, take care of her children. I think it will work within the schedule but will adjust if it doesn’t.

Arguably, I am a part-time housewife, just not a very good one. My husband works full-time outside of our home, I work part-time inside it. He is a much better housekeeper than I, and does a lot more general tidying and laundering, despite having less time. He doesn’t complain about this, but I know it’s not fair and feel like a bit of a heel. Maybe this experiment will turn me into an actual clean person? Stranger things have happened. 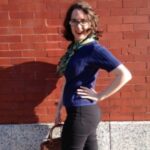