As we’ve talked about before, Chicago was Victory Garden Central during WWII. During the war, 1,500 urban gardens popped up, the North Park neighborhood had the largest garden in the country, and tons of food was produced. 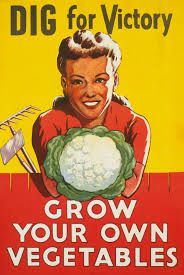 Victory gardening was a way for the nation to prioritize its major agricultural resources. Large-scale farming operations could concentrate of the crops needed to feed armies and keep the homefront going with things that couldn’t be effectively gardened, like wheat and corn. Vegetables, which were nutritionally important, and possible to grow at home, were outsourced to the populace, largely women.

The Peterson Garden Project carries on that legacy, by providing space and education for urban gardening. I garden at Vedgewater, at the corner of Broadway and Rosemont. A garden on top of concrete lot, it definitely meets the “urban” requirement. I can see the Red Line “L” train go by from my plot.

While I am not producing enough food to make it through rationing, it is a nice addition to our purchased food. I am definitely keeping us in greens. The real retrofitting value lies in feeling more connected to the weather, nature, and my neighbors. I’m also able to grow older and interesting varieties of vegetables, that don’t have enough appeal/ease of growing/etc to be available commercially.

This year, I did not grow strictly 1942 varieties. That was a fun experiment, but this year, I had the opportunity to buy all my plants from my friends at Montalbano Farms. Healthy organic seedlings, from just 60 miles away? Grown by awesome people? Sign me up!

It’s been a mixed year. We’ve gotten so much rain, and it hasn’t been all that warm. Still, things are hanging in there. My beans have, once again, contracted mosaic virus, but are somehow still producing. The rain rotted most of my zucchini plant, the summer squash and cucumber are suspect, but I have a happy ground cherry and delighted greens. Tomatoes are doing pretty well, too, knock on wood.

I also purchased a canning CSA half-share from Susie’s Garden Patch, in the aptly named Garden Prairie, Illinois. It’s the deal of a century, and possibly more than I can handle. In the spring, I picked up five pounds of asparagus, and later this season, I’ll acquire two bushels of tomatoes, a half bushel of green beans, a lot of sweet corn, and also some peppers, onions, and garlic. The price was most definitely right, and I’m considering it my garden insurance.