So I’ve caught the plague…

Almost certainly due to a herd of little kids coughing in my face, high-fiving me with their germy hands, and general spreading their germs in my direction, I’ve been struck down with illness.

Magic Healing Soup is something my mom invented, and I continue to make, with additional tweaks. It may or may not be actually magic, or healing, but it makes me feel like I’m doing something for my health.

The recipe is malleable, because you’re almost universally making it when you’re sick, so it’s not like you planned to have any of these ingredients around. At its simplest, it includes:

Everything else is just to fancy it up. When my mom made it, she usually added carrots, potatoes, and green peas. I go a little more Eastern, and  usually whisk in some miso and hot pepper, and I just started adding turmeric. I’ve added noodles and tofu in the past. I used to regularly add homemade kimchi, and that was superb. However, in the interest of a happy relationship, I haven’t made any kimchi in a while. (Bob objects to me summing this up as, “My boyfriend doesn’t let me make kimchi anymore” because that makes him sound like a controlling monster.) I added some vegetable protein  to this batch, just to bulk it up a little. I suppose you could add chicken or something, but I don’t know how meat works anymore, so don’t quote me on that.

Garlic, at least six cloves. (The garlic is key, here. Throw in some more. As much as you have.)
Half an onion
One carrot
One potato
1 quart + 1 cup or so  water
1 T. vegetable broth base (What? You thought I was going to use homemade veg stock? Did you miss the “I’m sick and didn’t plan, and I have a small freezer and rarely store stock in it anyway” part?)
Approximately 1 T. turmeric
Several shakes of red pepper
1 t. miso
2 T. lemon juice
couple tablespoons olive oil 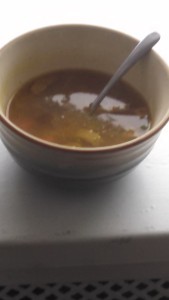 *Not a medical promise.