The darkness is becoming too much, lately.

There’s the physical darkness. Here on the eastern edge of the Central Time Zone, it’s getting dark early, as we approach the Solstice later this month. The days are getting shorter and shorter, and the sun appears less and less frequently.

But the physical darkness can be fought. With candles, with blankets, with UV lamps aimed at our faces and vitamin D supplements. The darkness that threatens me now is a dark night of the soul.

For once, I’m not talking about my own depression. All chemicals are well moderated, all cognition is behaving. It’s not my brain that’s the problem, it’s humanity. It’s Syria, and Paris, and Nigeria, and Palestine. It’s cops murdering black men, cops murdering black children, and it’s the mayor of Chicago. It’s shooting after shooting after shooting.

I don’t know what to do. I barely know what to think. Ultimately cynical, I think it’s always been this bad, just not in certain places or for certain people. I can’t quite rationally get on board with the idea that the world is getting worse. It just feels like it is. But, man, does it feel like it is.

So I have not been in much of a holiday mood, truth to tell. I have plans for the blog this month that are high-spirited and kitschy, and I’ll probably get there, but right now I’m just. not. feeling. it.

What do we do when all seems lost? The same things humans always do–we create meaning. I come from the perhaps controversial position that meaning is what we make it (i.e. your basic existentialist), an idea I don’t find one bit depressing, honestly.

So we went and got our Christmas tree today.

It solves nothing, and yet I feel the tiniest bit better. The communal aspect of the tree lot, the tapping into history and childhood, the sweet domesticity of picking it out with my partner and taking it home. The stringing of lights, of bringing a little greenery into the greyness.

Of course, it’s not like I don’t question myself. “Lucky you, soothing your angst about police brutality with a little tree. I guess cookies are an adequate remedy for people getting shot at the gynecologist.” There is so much evil and injustice, it almost feels gross to have any relief. What a luxury not feeling terrible every second is.

The thing is, my despair isn’t helping. It doesn’t make me do anything to fight for justice or improve the world–it paralyzes me. With just a little bit of light, I’m better able to face all the things that are wrong. If I’m going to fight, and demand, and throw down with the evil in the world, then damnit, I am going to have to manufacture so much love.

I’m building love through tying a ribbon on a stuffed hippopotamus because it makes me laugh, through digging out the recipe for my great-great-grandmother’s spice cake, through snuggling with my boyfriend and watching movies, through carefully hanging my childhood ornaments on a tiny Christmas tree. Through hugging friends, and making jokes, and doing yoga by candlelight, drinking hot things, and singing songs.

It’s what we’ve always done. Christmas itself is a great big series of retrofits–Christians adapting Pagan things to their worldviews, secularists adapting Christian things to their worldviews. We take the good things, the comforting things, the lights–and then fit them into the lives we’re living, and the beliefs we have. Whatever our beliefs, we can all use a little more light, because none of us can handle the unmitigated darkness. 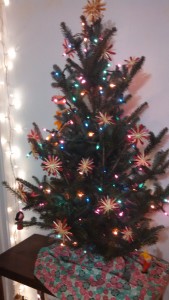